This is the second part of the story of Penn Church School, as seen through the eyes of former pupils. We now enter the 1930s. Huge thanks to Joy Feast (née Allen) for hosting a reunion with Dorothy Bates, Wendy Howard (Jackson), Barbara Higgs (Baker) and Peggy Walker (Pusey). I was generously welcomed into the home of Jeff & Sylvia Adams – and met older brother John. I chatted to Roy Allen by phone. Thanks to those who shared personal photos from their own collections. 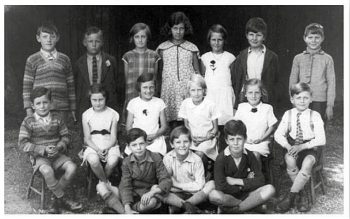 What is really striking is the enjoyment found by all contributors in their natural environment. As a group, the children of Forty Green would walk up to school and Sunday Church activities and “knew where every bird’s nest was.” It was a childhood of “amazing times” where people could leave their doors open and their bikes outside, where there were “no worries about money.” Occasionally the laundry man would come past and give the children a lift to school in his van. Other children walked from Crown Lane, Knotty Green, Tylers Green and Penn Street.

During the school day there were sometimes games on the field down by the Crown public house. “You would go through a kitchen gate to the wood for nature walks where you would learn about birds and flowers.” Girls and boys enjoyed gardening (with each child having their own strip around the playground). Dorothy Bates had blue irises in her patch. Roy Allen told me he had no problems when he moved on to school in Beaconsfield, except that he was punished with a caning when he tried to set up an allotment there!

So, to most, school was “like a happy family.” Two of the contributors’ said that their parents attended before them. The opportunities for involvement in the life of Holy Trinity Church were extensive, expected and aided a sense of belonging. On Sundays, the children would go up and down to church 2 or 3 times for Sunday School, the 11 o’clock service and Evensong, or for bell ringing and choir. Each child would have a Churchyard grave to look after and would collect wild flowers to decorate the Church Porch.

There was an afternoon walk with some fraternising with members of the opposite sex! All Christian festivals were celebrated. The nativity play was quite an occasion (see several well-lit photographs reproduced here). 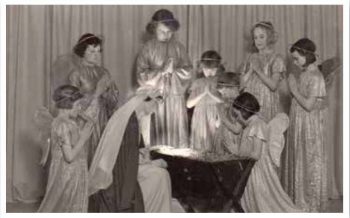 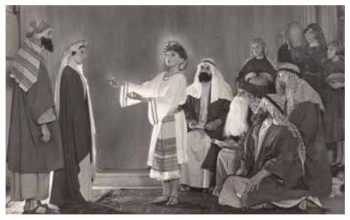 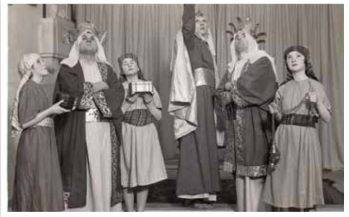 There were annual prizes and awards including a Bishop’s Prize and a prize for Scripture as well as a prize for perseverance; contributor Joy’s name appears more than once against these accolades.

In this period the Head was Miss Mitchell who was “always very strict”, and never ill! She used to drive a car and was respected by the children. Miss Davis was the “lovely” junior teacher. The school day ran from 8.45 – 3.30, starting with the register, a hymn and a prayer. Desks were in pairs, with lids that lifted to store books. “At morning break there was milk, coming by horse and cart, frozen in the winter and half sour in the summer!” and “The outside toilets left a great deal to be desired… there were ashes in the bottom…” Boys and girls had separate playgrounds – with the girls at the front and the boys to the side where the car park is now and where the alms-houses were. The Walls ice-cream van might sometimes stop outside after school.

Practical skills were encouraged. In early 1938 five senior girls attended a domestic science course whilst, on Fridays, three senior boys attend the handicraft course at Beaconsfield Senior School. Dressmaking was offered as a subject. A party of girls attended the Folk Dance Festival at the Town Hall, High Wycombe in July 1939, the same month as a trip to Whipsnade – and, of course, very shortly before the outbreak of war.

I was told by separate contributors of light-hearted teasing of the younger children with talk of the ghost of Daddy Carstairs, living on the upper floor of the school! There was also an incident where a snowball was thrown and the window of the North Room broken which resulted in a “bit of a telling off.” Overall, behaviour was good and discipline firm. There were “a handful of rulers” in the head teacher’s drawer for those that didn’t toe the line! One male contributor remembered how walnuts, collected on the way to school at Penbury Grove, stained their hands. This led to accusation of smoking and was punished with a caning. 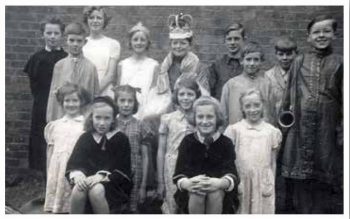 In the old bindings of this bulletin, formerly the “Penn Parish Magazine,” there are consistent reports of praise for the “good work” of the Penn Church School in the regular Diocesan Inspections. In April 1938, at Prize-Giving and Open Day, a local council official speaks of the value of small schools in the “development of character”, with the “most valuable asset being the close contact between teacher and pupil.” Penn Church School roll was at most 70 children, and towards its final years much smaller. This was despite the fact public subscription had raised £1250 to double the size of the school in 1910. (This investment was not matched in provision of local housing for young families.)

The 1918 Education Act, as well as raising the school leaving age from 12 to 14, brought medical inspection into schools. “Nitty Nora” the nurse and the doctor and the dentist would see Penn School pupils on the upper floor of the school building (now the Parish Office). One female contributor recalled that after her dental treatment her mum had to bring the pushchair to take her home! Another told me that she was supposed to have one tooth out and they took out about six! The school attendance officer would visit. There were absences for measles and mumps. 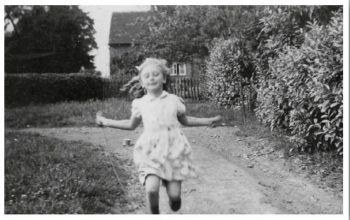 The School in wartime

Wartime brought different opportunities and challenges – including refugee children joining the school. When attendance fell off at Sunday School in early 1940 the May Parish Magazine exhorted parents that it was their “duty” to continue to send their children. A write-up of the school from 1939 until its closure in 1949 will feature in the next newsletter edition. Thank you for reading.